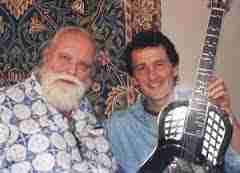 John Schneider is an internationally recognized guitarist, composer, author and broadcaster whose weekly television and radio programs have brought the sound of the guitar into millions of homes for the past thirty years. He holds a Ph.D. in Physics & Music from the University of Wales, music degrees from the University of California and the Royal College of Music [London], and is past President of the Guitar Foundation of America. A specialist in contemporary music, Schneider’s The Contemporary Guitar (University of California Press) has become the standard text in the field.

For the past two decades, the artist has performed almost exclusively on the Well-Tempered Guitar which uses different patterns of fretting according to the key or tuning system required. Recitals include Renaissance and Baroque repertoire in their original temperaments, as well as contemporary music in alternative tunings by such composers as Lou Harrison, Ben Johnston, Terry Riley & others. Since 1991, Schneider’s concerts also include vocal works of the maverick American composer Harry Partch (1901-1974), which he sings while accompanying himself on replicas of Partch’s Adapted Guitars [steel stringed instruments refretted in just intonation] & the Adapted Viola. The 1990’s also saw the creation of his chamber group Just Strings, which is devoted to the performance of music in alternative tunings. In 1995, they were invited by the Japanese Embassy to present a series of lectures and concerts throughout Japan under the auspices of the prestigious Interlink Festival which annually selects one American ensemble to represent new trends in American Music. Since 2000, Schneider has recreated many of Partch’s unique instruments to perform the composer’s singular chamber music, and in 2002 he commissioned the first Just National Steel Guitar, and now regularly performs & records the works by Lou Harrison, Terry Riley & others written for the instrument.